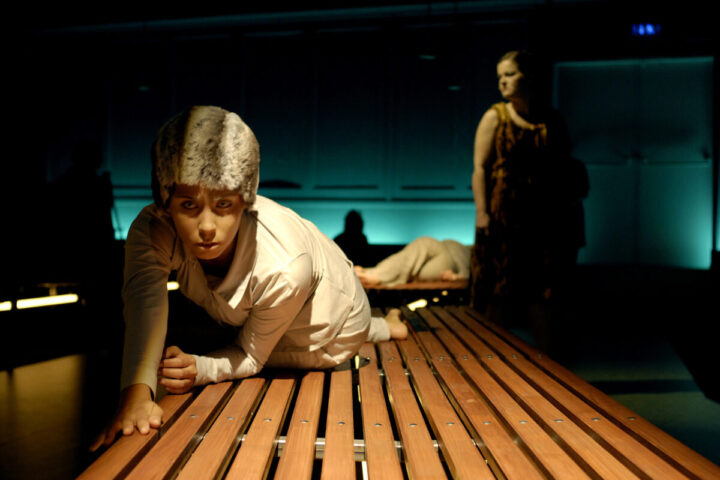 Artist Talk
on Friday, March 31st following the performance
The guest is Falter Editor-in-Chief Florian Klenk, whose research into a Viennese escort service in 2005 provided the impetus for Elfriede Jelinek’s text.

Published chat logs have given us insights into the dark side of power not only since 2021. As early as 2005, intercepted telephone conversations of a Viennese escort agency – published by the magazine “Falter” – caused a scandal. Elfriede Jelinek used the protocols for her text Über Tiere (“On Animals”), Christine Gaigg staged the Swiss premiere in 2007 at Theater Neumarkt Zurich and at Tanzquartier Vienna.

Über Tiere consists of two parts that are mutually dependent. The first part can be read as an inward address of devotion to an absent beloved. In the second part, the assembled telephone phrases by human traffickers, intermediaries, customers, and those affected explicitly demonstrate the effects of the business of sexuality in a capitalist society fenced in by misanthropic immigration laws. The body as a symbol of what is closest to those affected by human trafficking and at the same time least belongs to them.

In the first part, Christine Gaigg’s production allows the audience a physical closeness to the dancers’ bodies that is unusual for a theatre. In the second part, the situation is reversed. The balance of power between being looked at and looking at begins to falter, the audience itself becomes a theatrical object.

“Christine Gaigg’s first theater direction wisely dispenses with a bold duplication of the provocations produced by the Jelinek text. Her staging listens into the text and pushes its physicality out into the visible. Her approach is subtle, rather restrained, but conceptually and formally consistent. Well thought out down to the last detail, austere and monomaniacal – like the original text.”
Neue Zürcher Zeitung, Bettina Spoerri, 02.07.2007

“Jelinek’s ‘text surface’, which knows no stage characters, is cleverly distributed among the four speakers. (…) The resigned, sometimes angry elegy has power and wicked wit. And is effectively contrasted by the machine-like bodies on the slopes, which turn the theater hall into a factory hall.”
Tages Anzeiger, Peter Müller, 02.07.2007

“The audience is not granted the secure position in the darkened auditorium, but Gaigg sends them onto the stage between actors and dancers. With her experience in such situations Gaigg manages the difficult balance between forced closeness and open distance. (…) Gaigg’s translation of the text lives from this spatial realization of power, which can be experienced at close quarters and yet never slips into the blatantly psychological.”
corpus, Judith Helmer, 26.10.2007

“Jelinek has created an easy-to-understand text that literally blossoms through its pronouncement in Gaigg’s choreography.”
DER STANDARD, Helmut Ploebst 27. Oktober 2007

“Christine Gaigg has succeeded in creating an atmospherically very dense interpretation that, despite its brevity, leaves nothing to be desired.”
Wiener Zeitung, Brigitte Suchan, 27.10.2007

CHRISTINE GAIGG/2ND NATURE
Restaging in March 2023 within the framework of Living Positions, invited by Odeon and co-curated by Liquid Loft