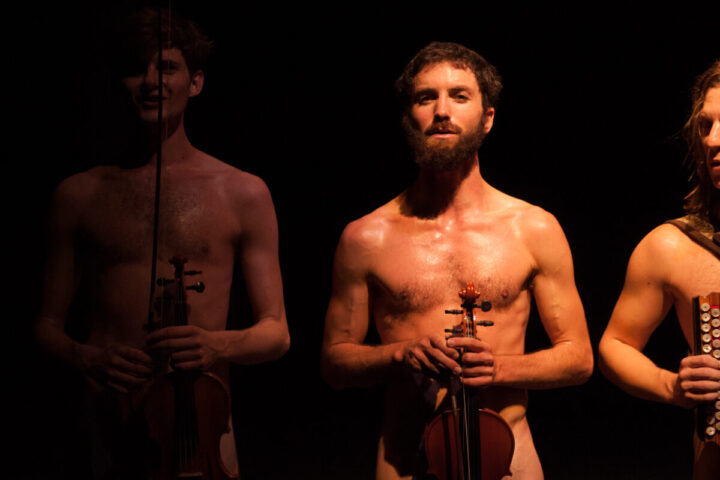 Artist Talk
with the “Sons of Sissy” Team
on Friday, March 17th following the performance

The city newspaper Falter described Simon Mayer’s solo SunBengSitting among the top theater pieces in its 2014 annual review as an “ingenious, naked yodeling interplay of folk and contemporary dance.” In Simon Mayer’s group piece Sons of Sissy, the focus is once again on the cosmos of traditions, folk dances and folk music from which the Upper Austrian farmer’ son Simon Mayer originally comes.

In an experimental way, the four performers and musicians make use of traditional alpine live music, diverse group dances and ritualistic practices. They liberate these from conservatism and conventions and establish a novel fusion of artistic reinterpretations and temporary attributions of social meaning. Beyond categorizations and pigeonholing, the Sons of Sissy live up to their name: they sometimes behave as a quirky folk music quartet, sometimes as an experimentally playful ritual dance combo, and radically and humorously break down traditional male role models in customs.

They tear you back and forth between fascination and laughter. And at one point, they take your breath away
Süddeutsche Zeitung, 2015