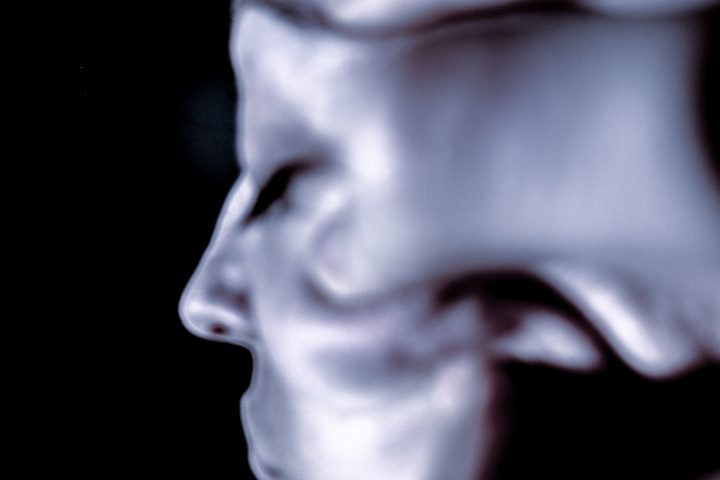 In dance the bodies become political, at the same time the political becomes poetic. In Stranger Than Paradise this double game is played with extraordinary concentration. The title of this production is borrowed from a road movie that serves as an influence not aesthetically or narratively, rather atmospherically. In 1984, the director and author Jim Jarmusch sketched the tragicomic coexistence of three lonely characters as a choreography of wintry forlornness: exhausted bodies in wide, empty spaces, in “posthuman” scenarios. The idea of urban cool, which Jarmusch transfers to the snowy landscapes of Cleveland, is translated by Liquid Loft into a reflection on the expansion of biological capacities: into the mechanical, the creatural, and the “monstrous” of an animal-human existence.

The body is a obsolescent model; it is still needed, but the preparations for its abolition are in progress, which evokes melancholy and farewell manoeuvres. The old utopia of the equality of beings is hidden in the sphinxic shimmer of the dancers. Dealing with the humanimal raises questions of division and duplication. Is the image that the mirror produces an addition or a division? Does it share the view that is presented or is it simply duplicated?

Modification and infection are closely related: we are bio-machines, electronically improved, but biologically endangered. Only technologization, the synthesis of flesh and mechanics can secure us: The illusion of the human, which its perfectly reproduced surfaces can generate, conceals the artificiality of the new species. We will get used to them – that is, to ourselves.

Notes Regarding Stranger Than Paradise by Liquid Loft
by Stefan Grissemann

With every dance step, humanity also advances, barely noticeable, but consistently. Mankind looks back, relates to what has been and at the same time it moves forward. It is no coincidence that the art-historical references are just as decisive in the choreography of Stranger Than Paradise as is the latent futurism in the images, the figures, their drifting, their tics. Time is out of balance here, it appears boldly compressed, yet surprisingly re-developed and unfolded.

Liquid Loft’s productions of the past two years update each other: The former Stand-Alones who only work with themselves are now moving closer together, albeit avoiding any contact; they glide silently past one another, only partially facing each other. The inner logic that they follow is a future one, the pathos of their bodies dampened by the serenity they are programmed for: fluid, fleeting characters, swaying in step, frozen in pain as if behind cold glass.

The images of the individuals, undissolved between animals, humans and machines, melt gently in the concave mirrors. Their surfaces generate illusions, do not throw back or reject, but rather invite people to pass through, to transit. Lewis Carroll’s Alice ends up in her Wonderland by going through the reflector, and also Jean Cocteau’s youthful poet in Le sang d’un poète falls into the abyss of a disturbing parallel world after jumping through the surface of the mirror-ocean. Behind the reflector lie opposite worlds, the unexpected, the preconscious. Illusion is merely the other side of “reality”, distortion the only way to recognizability.

In the improvisational run-through of costumes and disguises, the desire for flexible, or if you will: liquid identities becomes clear. The colors glow, but the bodies are threatened to disappear behind them (as in the mirrors), to adapt, to blend in until they are invisible. The textiles help to keep changing directions, they assist with the desired course (and self-) corrections. In the sober white of the stage, the ensemble seems to be blurred: out of focus. The mirror shares emotions (and communicates them), but remains completely stoic itself. It doesn’t set a focus, acts egalitarian, because everything is equally valid in him. The actors, who loll in front of the distorted surfaces, blur into one another.

Stranger Than Paradise allegorically melts transhumanism and the pandemic into one another: The human body can be touched and technologically expanded; everything that we call consciousness takes place in the networks of our brains. It is available for upload to other data carriers. Our deficient human bodies are technically enriched by implants and prostheses, elevated to cybernetic organisms. The merging of man and machine, which was celebrated by the band Kraftwerk in 1978 in their electro classic, transfers the godlike ideal of existence imagined by Nietzsche a century before into the age of robotics (“Man machine, semi human being / Man machine, super human being”) . The Übermensch from back then is transformed into über-androids, because Homo sapiens has disqualified himself and gambled away his alleged wisdom. Suggestions for its improvement are on the table: The next level of being human lies in a computer-aided new solidity (and solidarity) of body and mind. The techno-optimism that underlies the “spiritual machines” of Google futurist Ray Kurzweil, however, has this dark opposite side: Human self-disempowerment taking place before our eyes accompanies the automation of intelligence, the simulation of creative thinking.

Stranger Than Paradise, set in sunken moods and deceptive images, is an elegy that, in a slowed-down configuration, marks the transition from one species to the next, and it is a reflection of the systematic expansion of human capacities into the mechanical, the animal, and sometimes the “monstrous “of a mixed animal-human existence. A series of cryptic poses, which in this work are carried out like secret agreements, form the prelude to a play of magnetism and fluctuation.

Artificial intelligence, which is modeled on the natural but was designed to go beyond it at any time, will lead to the establishment of a new ethic that non-machines are demonstrably incapable of. The self-learning, cognitive apparatus that we put to our side make algorithmic decisions based on an incorruptible but highly problematic morality that chooses the lesser evil in any life-threatening situation. Whoever wants to save has to make sacrifices. The responsibility for the triage is delegated to the machine. It was eventually programmed to think for itself. That sounds paradoxical: self-determination being prescribed, autonomy required, and freedom being fastened. The structural contradiction that is found in this and the compulsion to achieve higher and higher levels of efficiency have made those who will replace humans very tired. Their ennui is tangible, but it throws off moments of ultimate beauty.

The separation of body and feeling is almost impossible to achieve, although the risk of a permanently changeable identity radically undermines physical stability, even as it produces increased euphoria: I can be anything, including an object! The human development thrust once propagated by Friedrich Nietzsche inevitably leads, when viewed from the present, into an artificial cosmos, into machine art, into a Second Life that offers new “realities” and virtual identities.

In paradise everything would seem strange (if only because it is so far away), but behind the liquid mirrors and beyond the anthropo-logic, strangeness is a wild understatement.

Claudia Slanar on Stranger Than Paradise by Liquid Loft

This text has been published by Tanzquartier Wien in TQW Magazine.

Taking the performance situation into account when contemplating the performative arts isn’t really an option these days. Premieres online instead of onstage, pieces on the screen, watching on the computer. After almost a year of “practice”, a democratisation among participants in online conversations can be achieved, provided the tools are configured accordingly. The psychological barrier to ask questions is easier to overcome; people tend to have fewer qualms about writing in a chat compared to shouting at the stage from an auditorium. And, apparently, it’s also easier to express praise and thanks that way. Of course, all of this is at the expense of actually being “present”: of seeing and hearing the dancers’ bodies, of feeling, smelling, hearing the other spectators’ bodies – none of this is possible.

Why this lengthy observation in the opening remarks? Stranger Than Paradise cannot begin without reporting on the conditions of its performance either. First, I see a stage, eight performers move about on it, warming up, rehearsing. The edge of the stage is visible, covered with clothes that will be changed during the piece and fabrics that will be used as part of the performance. This exterior is complemented by the recording equipment: camera, monitors, computer with editing software, sound and light mixing console. The beginning resembles an “establishing shot” in film: the scene is set, the context is established, mostly from a bird’s eye view, from above at an angle, too. After the cut, I’m genuinely closer to the action. And soon, guided by the camera and the director, I’m right in the middle of it. As I sit in front of my computer screen with good headphones – it’s dark outside – it actually feels like I’m watching a movie, all of a sudden. Which makes sense in the context of Liquid Loft’s practice of frequently conceptualising bodies as mediatised, and the act of performing as a practice defined by cinematic images, even a cinematic language. The music – the score – also adds to this effect. It establishes the atmosphere, among other things, it underlines the solos’ highlights. Through it and with it, the dancers drift into another (dream) world, are recovered again in the end and finally, after the music has stopped, they are left surprised, confused, perplexed and are released back into – well, where to exactly? Off-screen? Into reality?

The interim are 40 minutes’ worth of reflections on images of the body, images of people; on loneliness, and on the possibility and, at the same time, the impossibility of approaching one another in a community. Fluid beings rather than machines or robots manifest themselves, which is underlined by a stage set made up of medium-height concave mirrors. This house of mirrors that is a blend of Deleuzian actuality and virtuality – outside of which the individual can no longer conceive of itself (or so the theory goes) – contains infinitely deep sadness and melancholy. Because the exterior, the coming together of these individuals also has the capacity for rigidity, for stagnation. There is only a (very) vague hint of becoming. This “becoming” (animal, machine, post-human?) is also associated with exertion and suffering. An echo of ubiquitous neoliberal self-optimisation is palpable but isn’t the most pressing concern. This seems to be the constellations and possibilities of communication that don’t exist yet and have to be renegotiated. The pas de deux are performed side by side. The bodies as signs (of automatonism, animalism, humanity) replicate themselves by way of their gestures, repeatedly solidifying into an image, sometimes even into eerie shadows. The most touching moments are those that approximate a connection and, for a little while, achieve harmony.

After the end of the piece, with the credits still running, I can’t help but google the music and make some surprising discoveries: Penelope Trappes’ interpretation of Nick Cave and The Birthday Party is colder than ice; a slowed-down Annie Lennox suddenly sounds like 1970s soul and then again like David Bowie. Ultimately, this draws the attention back to the fluidification of a rigid concept of identity and the not yet exhausted possibilities of becoming. Despite the melancholy, the sadness about an uncertain future, there remains a feeling of happiness, a sense of being moved, that lingers.

Claudia Slanar is an art historian and the curator of Blickle Kino in Belvedere 21. She writes about film and visual arts, sometimes about performances, and with pleasure about site-specific art.