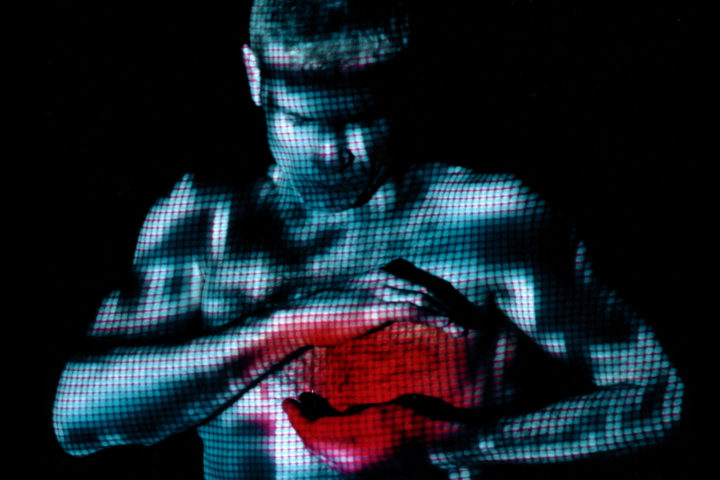 If the words ‚virtual reality‘ ever had a meaning then it became apparent in the performance of the Austrian media artist Klaus Obermaier. Seeing is not believing. With all respect to the ‚Dance Europa‘ festival, this minmalistic production (…) stealed all other performances the show.
A mesmerizing and sophisticated project.

An ingenious dance performance of the two artists Obermaier and Haring over the topic of the manipulation of the human body in the age of the biotechnological reproductibility. …

D.A.V.E., a sensational dance-video-performance. It is high voltage throughout the entire 60 minutes of D.A.V.E. Chris Haring, the choreographer and solo dancer, masters the empty black stage with enormous acrobatic-athletic presence and changes his looks, identity and even gender through the videos of the electronic-art artist Klaus Obermaier. This virtual human is presented in artistic precision which cannot be found somewhere else.

„The body cannot be transformed back into his soul“ was declared by Horkheimer and Adorno 1947. Since then the manipulation of the body has reached dizzy dimensions. At the dance project D.A.V.E., short for “digital amplified video engine”, the body acts literally as projection surface. Barefooted, with naked upper part of the body, Chris Haring rotates, accompanied by roaring street noises before he mutates like a “clay man” being modelled. He tears apart his face like plasticine, his eyes walk, the chin grows downwards and forms a scary mouth.  The on-the-floor winding, its powerful litheness becomes a screen for digital images of virtual metamorphosis. D.A.V.E. demonstrates the dissolution of borders accompanied by sound collages with buzzing synthesizer effects and pulsating forward beats. Man becomes a woman who shivering, covers the bare breast. The joint production of dancer Chris Haring and the media artist/composer Klaus Obermaier celebrates the wondrous new possibilities of physical transformation in a metaphysical state of being.

Swallowed by the „Ego“ / Malve Gradinger

Aldous Huxley (“Brave New World”), Jevgenij Samjatin (“Us”), George Orwell (“1984”), the classic triumvirate of the negative utopia was brought to the stage: D.A.V.E. of the Austrian Duo Obermaier & Haring is a horror-body-picture-show from the laboratory of transplantation and genetic engineering. The man on the stage makes a few movements. And suddenly he dissolves. Another man moves and rotates, soon with racing speed, all in the same position – “Virtual Movement”. The illusion fades and the dancer-choreographer Chris Haring begins one of his firm physical movement cycles. And again and again he is swallowed by his second, the digital ego. A computer-techno game, sound-animated by Obermaier’s multicoloured electronic thunderstorm, like a horror vision of a weapon used on a crippled and disabled clone of a human being.

The grand opening of the 25th „Akzente“ festival was followed by the much awaited presentation of DAVE, digital amplified video engine. Klaus Obermaier and Chris Haring created a unique stage reality in which perfect video technology, music and dance merged into something which has never been seen before. During the performance contours dissolve again and again; movements are being manipulated where in the end, the male dancer appears as a coquettish female dancer. It is a fascinating process of the manipulation and reconstruction of the human body by genetic and biological engineering as well as computer technology. Klaus Obermaier and Chris Haring presented a performance where the impossible seemed to become possible.

Thanks to the precise eye of Obermaier and the phenomenal body presence of Haring, a theatrical piece of wonderful poetic suggestive power emerges. Generally DAVE is one of the most remarkable works in the experimental field of video-dance-art. The dynamic rules of dance performance and the digital images were integrated beautifully. With amphibian like litheness, Haring tries to escape from gravity, lets a red ball bounce through the veins of his transparent limbs as if it would be his own heart. And transforms in the end into a woman as if it would be nothing. Only on rare occasions the dynamic laws of dance and performance art have interacted in such a beautiful way with the world of digital images before.

At the festival Ars Electronica the mind delusional fusion of man and technology was fascinating. What can you actually rely on? Certainly not on your own eyes. This was demonstrated in the Brucknerhaus Linz in an impressive way by the performance D.A.V.E. of media artist and composer Klaus Obermaier and dancer Chris Haring. Not only does this performance provide a fascinating spectacle, it is also an interesting, almost philosophical project about the ego and super-ego, about the many facets and faces of a man. That in the end this multiple creature which wants to get rid of its fellow occupants in the fleshly shell becomes a woman is a surprising end of this much acknowledged, advanced performance in the sold-out Bruckner hall.

Imagine a man, fair-haired, clad only in white cargo pants, slowly turning round on an empty stage. As he turns he morphs right before your eyes into someone else. A real „wow“ moment, and no, not the effect of hallucinatory drugs or magic, but clever result of video images projected precisely onto the body of the dancer. Meet D.A.V.E. – Digital Amplified Video Engine – an appropriately real-virtual performer for our digital times. The multimedia dance performance from Austria, created by multimedia artist Klaus Obermaier and performed by Chris Haring, was a perfectly orchestrated blend of technological grace and human versatility. And humor. Even without the projected images, he made us look at the human body differently. He was amazingly flexible, but the odd poses flow naturally, unlike those dances full of painful, extraneous „contortions for the sake of contortions“. Clever images, clever technology, clever dancing. But what really pulled the performance together was that it felt wonderfully unpretentious, you were never quite outside a play-zone. Yet it was deep enough to make you think and layered enough to give you answers. Do you remember that runaway hit, THE MATRIX ? It worked because familiar elements from digital coding to virtual reality to a love story were put together in a way that was something completely different. Well, D.A.V.E. sort of fits into that conceptual mode – different threads spun into something unique, oddly familiar but completely new. An experience quite unlike any other, … because he´s unashamed to offer you beauty, grace and fun while experimenting with the edges of technology.

the future is virtually yours | jamaludin jalil

In this combination of music, dance and video, Haring is transformed into D.A.V.E., a virtual incarnation. The composer and video artist, Klaus Obermaier, attempts to integrate all three elements to disslove all existing boundaries. On a more philosophical level, it explored issues of gender, identity and urban deconstructivism through the juxtaposition of real and virtual situations. The driving rhythms of the mainly clubby/trance/techno music that Haring moves to in slow motion seems to confront out traditional instincts with its contrast and at the same time sweeps us into the highly technological world of the 21st century. Through the visual transformations and Haring´s taut torso, D.A.V.E. has set a benchmark by which other frontiers can be challenged.

For most parts, Haring takes centerstage and functions as the primary vehicle for the images. But I do believe that the real genius lies in Obermaier‘s video-graphic manipulations and his hypnotic compositions. Not surprisingly, the creative impulse for D.A.V.E. is that of the prolific, computer-aided visuals of MTV, other contemporary multi-media artworks and that of the electronic dance music circulating in the club circuit. Even if one does not enjoy the physical theatre and video images, Obermaier also presents an aural feast with his original soundtrack which truly brings out the mood and sets the rhythm for the dance.…

is this the future of humanity? | eleanore tan

… Klaus Obermaier, the brain and expertise behind D.A.V.E., has created a groundbreaking work that addresses the issue of redefining humanity in the new millennium in a thought-provoking manner that transcends culture and language.

Poetics in arising
On the first festival night the guests from Austria, Chris Haring and Klaus Obermaier filled the audience in the Large Hall, in the Cultural centre of Novi Sad with enthusiasm by their “hologramic metarmophoses”. … All these elements are brought to a fascinating perfection and theatrical virtual reality that could be seen only in technologically advanced science fiction achievements in cinematography. On the stage, everything had even greater effects, and became more real. Having accustomed us to its presence the human body (Chris Haring) experienced extraordinary transformations by the play of the lights and darkness and the moving pictures which were projected on it. With the simplicity of its ideas, perfect performance, clever dramaturgy and wittiness, D.A.V.E. exceeds the limits of formal experiment developing into an actual story of horror but also of a new poetics in arising, thanks to aggressive inevitability of permeating of technological and biological achievements.