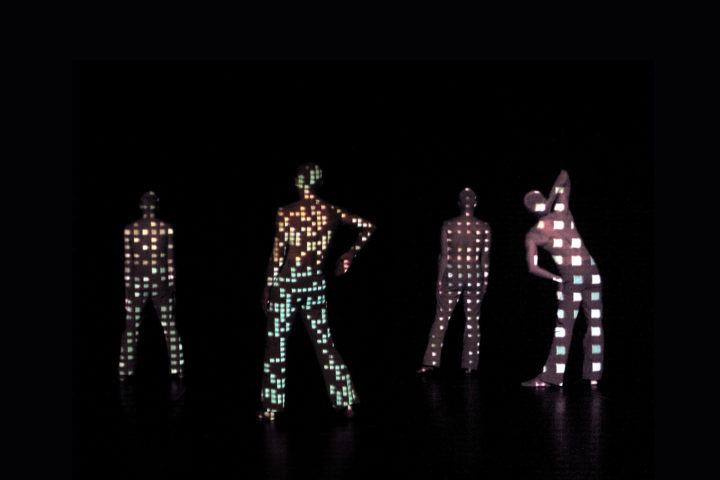 If ‚DAVE‘, the title of Vivisector’s previous work, sounds like it might have been a dance about a bloke in an anorak, the reality couldn’t have been less pedestrian. DAVE stands for Digital Amplified Video Engine. Which is geek-speak for an uncanny technique of projecting virtual reality onto physical bodies so you can’t tell which is which any more. The result was a dance-technological extravaganza of cyberpunk fantasy.

Most technologically-enhanced dance lacks a motive beyond displaying its cleverness. But Vivisector, habitués of central Europe’s avant garde, have taken it to sensory-busting dimensions that leave other exponents tripping on their own wires.

This year’s show, Intervention in the Sweating Body, (sounds better in German, no doubt), had no less bite. It combines the wizardry of media artist and composer Klaus Obermaier with the choreographic dark heart of Chris Haring, who leads a line up of four smooth movers: boys in bleached jeans, with bleached blonde crops and lily-white skin. In our world of cloning, artificial intelligence, and virtual reality, Intervention asks at what point science displaces our humanity. And even if, like me, you didn’t think you cared about the question, its dystopian odyssey leaves you reeling.

As it opens, our flesh and blood dancers, sashaying in the dark, are already being taken over by a new life form of pure, weightless energy. One by one they fizzle into reception as zillions of tiny light signals course through their circuitry and then die out. This digital light dance heralds a new dawn: a primal soup of man-made phosphorescence.

But later on the virtual alter egos become more sinister. Exact digital replicas in 3D with an unholy life of their own take possession of the physical. Their flesh is warped and liquid, their movements are superhumanly fast and gaping holes open up in their bellies revealing a soulless void. They could be advertising images for their jeans, airbrushed and endlessly duplicated – an army of pixels bent on world domination like the brands they serve.

Think of The Terminator, only the grisly mutation from reality to simulacrum and back again happens in our own space and time, not on a screen.

The dancers aren’t always digitally disfigured. In fact their unadulterated bodies are at least as ghoulish as their various cyber versions. And choreography works as hard as technology in the SFX department. Dance-wise, they wriggle and squirm, their various body parts coevolving as though in absence of a mind. Their limbs get stuck on the wrong side. Stark lighting cuts off chunks of their flesh from out sight, leaving them like headless hybrids of biology and science, grown in a lab, and coming to a ghastly kind of life.

Some would say that silicone and computer chips have already coupled with flesh and blood and we’re all cyborgs now. Whether that’s true or just a clever conceit, Vivisector’s striking interpretation of it haunts you for days.

Conclusive concept … Perception is a steady illusion susceptible to deceptions of all kinds: Nobody start for this thesis at present a more convincing proof on the dance soil than Haring/Obermaier – a brilliant termination of the festival „TanzUrban“ organized by the Heidelberger UnterwegsTheater in the FNAK.

Visitors in London. At the Purcell Room the new motion-picture technology of VIVISECTOR made us gasp and rub our eyes. Four men moving slowly on a darkened stage gradually dematerialise until they’re made entirely of snowy television fuzz, and then they disappear. Captain Scott may be able to beam up a crew in „Star Trek“, but this was live on stage. … VIVISECTOR is more than mere trickery, evoking an unsettling robotic ambience of android interaction. Though its choreography is limited – often necessarily restricted by the technology used – its futuristic merging of physical and virtual realities is both fascinating and enthralling.

The technospeak is a little daunting. „The video-technological concept of moving body-projection“ may leave you wondering what you’re about to see, but its realisation will leave you amazed. Never have I seen technology so clever integrated into dance as here, in Klaus Obermaier and Chris Haring’s VIVISECTOR, which enjoyed a weekend of performances at the South Bank Purcell Room. …

It has become quite a thing among a new wave of contemporary dance choreographers to use digital technology and create an interplay between real and ‚virtual‘ dancers – Britain’s Wayne McGregor is notable in the field. But none of this prepared me for the wizardry of an Austrian production. VIVISECTOR, at the Purcell Room last weekend, a collaboration between Chris Haring and Klaus Obermaier, performed by Haring and three other men. Their bodies functioned as canvases for stunning projections that clung to their outlines, filled their shapes, transformed and dehumanised them.
First they became networks of flickering pixels. They lost their heads, their feet glowed like embers. Torsos dissolved away before our eyes; pulsating bodies appeared in abdomens – a mass of corpuscles, intestines. the quartet changed into weird beasts with ghoul faces. Cleverest of all was when videos of themselves were projected onto the men. They turned towards us, but we were looking at their backs; arms crossed chests and abruptly vanished; jaws were dislocated and solar plexuses performed acrobatics. Oh, and the dancers levitated. Without doubt a high-technical tour de force that left you goggling. …

If Vivisector had appeared at the Tate or the Serpentine galleries, it would be short-listed for prizes and given double-page reviews. This latest collaboration between choreographer Chris Haring and video artist Klaus Obermaierexplores the physical and metaphorical possibilities of the human body. Within an hour, its four male dancers are flayed, deformed, transposed into luminous, jostling atoms and lent the serene radiance of classical statues.

The imagery in Vivisector is achieved by clever and mystifying technology. During much of the show, the four identically dressed performers function as blank canvasses upon which video and light effects are projected. So precisely do these projections remain within the contours of the men’s bodies that they seem to change form and substance before our eyes. Some of these transformations attain a metaphysical poetry. There is a near-death sequence in which the men’s bodies are anatomised into pixels of light which pulsate so fiercely that the dancers implode and disappear. And there is a section in which green and purple patterns bleed around their torsos then dissolve like rotting flesh.

The fact that these are real people, in real time and space, makes the quality of the illusion more visceral and magical than any computer-generated movie stunt. At moments the collaborators intensify the confusion between live and digital by superimposing treated film of the dancers onto their actual bodies, the fit so exact that we do not know if this is a live or fake performer. But the climactic effects are extraordinary, and so, too, the realisation that this kind of experiment could change dance for ever.

Only rarely can a critic say, ‚I went home whistling the scenery,‘ and mean it as a compliment. But in VIVISECTOR, the new dance piece by choreographerChris Haring and video-artist-composer Klaus Obermaier, which appeared at the Purcell Room for three performances, the dance, dancers and visual effects were inextrictably and memorably fused. To enjoy one was to enjoy them all. Isolating the dancers in darkness to allow these illuminating possibilities free rein, this innovative choreography led our imagination into fascinating territory, where dance, design and technology reinforce one another.

„The potential future removal of limitations upon the body“. Thus describe Klaus Obermaier and Chris Haring their video and dance work „VIVISECTOR“. A difficult topic – nevertheless the two transfer it with their appearance in the series „bone machine“ in the ARGEkultur Salzburg with ease: Humans become pixel fields, ions and electrons dance by and over the bodies, simulate bloodstreams and bodily functions. Artificially working, blond clones from a bioelectric laboratory curve in their simulated test tube such as worms, learn to creep, crawl, upright to go. But the movements are homogeneously, coordinated. That cannot function…

But the technology makes it possible. Limitations of the life are removed. A recent pixel puzzle develops. Almost one expects the instruction „Beam ME UP“. New bodies form themselves, become spare parts depots for organs. The human blurs like molecules in the Heissenberg‘ uncertainty relation. Multi-functional body machines at the Gaengelband of the genetic engineering develop – for puppets of the life.

But the human breaks through. However Frankenstein-like, those boundaries between property and bad are smeared. Recently the technique intervenes, corrects the artificial people nature, adds a pinch of heart. The pictures become again more softly, more easily, more dance-like. A beautiful, exciting performance.

Almost prophetic seemed the transplantations transferred to the body through video technology by the video and sound artist Klaus Obermaier and the choreographer and dancer Chris Haring. Beyond all conventional dance performance they anticipated the interaction of body, light and space. Until now, on stage dance and video mostly existed side by side. Here, the two performance architects have created a new and rounded up combination of video art, music and dance never seen before.

VIVISECTOR by Chris Haring and Klaus Obermaier and its combination of dance, performance, video projections and live music opens up new directions. The implementation of video light leads to new stage dimensions. The virtual dancer has outgrown the screen and enters stage, manifold variations for a game with illusions have been launched.

… In VIVISECTOR all that happens goes beyond concrete interpretation. Communication goes on in a nearly playful manner. As regards choreography, its the simplicity that creates an unbelievable multiplicity of motions. Haringand Obermaier convincingly stick to their principle of success which is reduction.

VIVISECTOR is yet not only about show and dance. The dancing part, still present, becomes an attribute, a design, the skin of the body becomes medium and screen for an astonishingly drafted computer design, wherein man is only a mobile object. It is obvious that by means of projection very extreme visual experiments, from absurd distortions to real pictures, can be produced. The path entered by Klaus Obermaier and Chris Haring has led to wide open doors!

And the result is a great visual show lasting about one hour, which deals with dance only marginally. Human beings move like machines, aiming to increase the technical effect. A frightening vision at the end of a dance festival, fascinating as well as irritating.

Breathtaking, the numerous tricks which seem to set gravity out of order and shape heads into distorted masks. Almost frightening, the whirring future scenarios invented by Haring and Obermaier and backed up by spherical sound patterns. There are the irritating pictures of a nightmare, wherein the bodies finally open themselves and give view to their inner lives. At the end the abdomens turn into sneering grimaces.
Applause to a mysterious evening between the worlds.

Impressive dance goes one step into future.
Never before has anybody integrated video art into a dance performance so consistently as choreographer Chris Haring and media artist Klaus Obermaier. As a novelty of stage aesthetics VIVISECTOR is an extraordinary success, in terms of contents and emotional effects, it at least provokes crucial questions: how strong is the impact of the virtual world on real human motions?

Motions in the Rhythm of Pixels / Jasi

In VIVISECTOR the body has no limits: it dissolves into pixels. Atom-like limbs soar through space, the inner body gives view to its own life, men start to soar freely through the room. VIVISECTOR the unusual event is called, where sound, dance and video merge in a tightrope walk between reality and virtuality. VIVISECTOR cannot be categorized as it differs completely in concept and performance from other performances seen until now.

Video projections and living bodies fuse into a strongly effective performance. It is a perfectly made illusion of a metamorphosis, staged by video projections, moving bodies, spherical sounds and precise light.